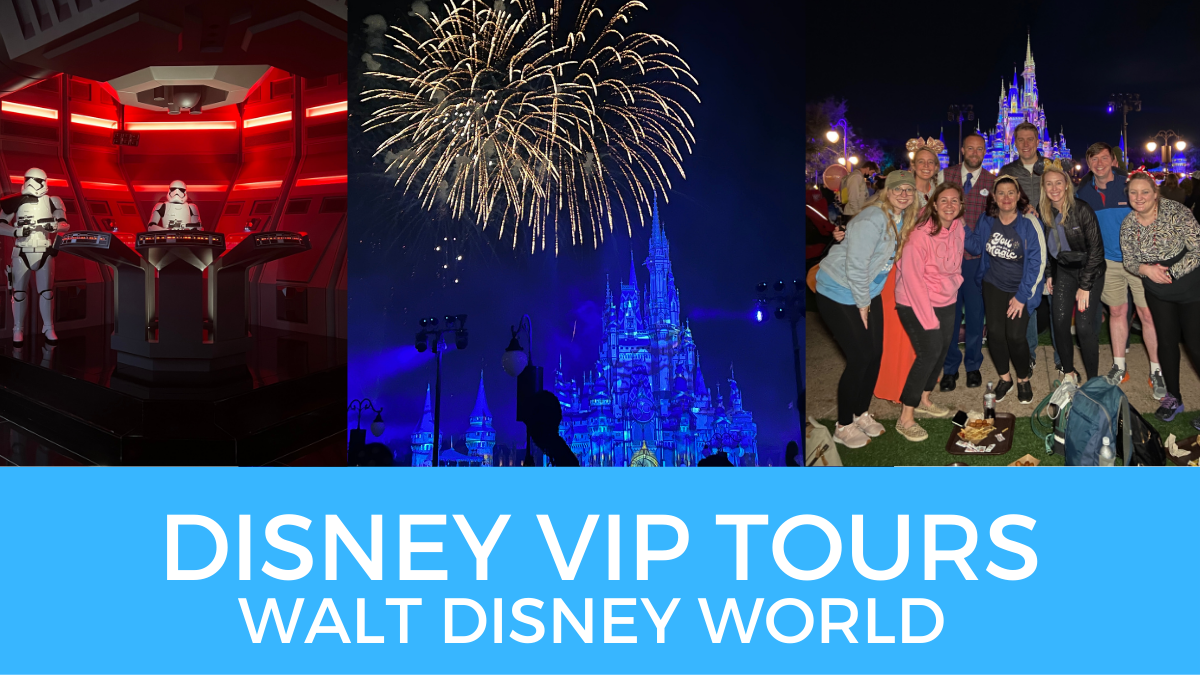 Last weekend I got to do something I’ve never done before at Disney World – go on a Private Disney VIP Tour. If you’ve been considering a Disney’s VIP Tour, I highly recommend booking.  Each tour is a minimum of 7 hours and led by a Disney VIP Tour Guide who has been hand-selected and expertly trained to plan the perfect itinerary for your travel party. You’ll be able to get on lots of attractions in way less time than you would without their guidance and learn about the parks as you go.

If you’d like to book a Disney VIP Tour, let me know! As a Travel Agent who specializes in Disney, I can assist you in booking your VIP Disney Tour.

What is a Disney VIP Tour?

Disney VIP Tours first began with the Disneyland Resort Ambassador program, which was started by Walt Disney himself! The program was created to assist guests to have the most unforgettable trip possible. Having gone on a VIP Disney Tour, I can say it is truly an unforgettable experience.

Each tour is a minimum of 7 hours and can be planned to fit your family’s “must-do” list. Working with your tour guide, you will determine where you want to go and what you want to do. This can include attractions, shows, parades, dining and fireworks.

Valid park tickets are required for a Disney VIP Tour for all guests and are not included in the price of the tour.

What Do You Do on a Disney VIP Tour?

Each tour is completely different because you as the guest are able to provide your list of ‘must do’s,” however I can share what we did on our tour.

Our tour began at 12:45 AM. We met our VIP Tour Guide, Pete (we loved Pete – highly recommend requesting him if he is available) in Pandora at Disney’s Animal Kingdom. Our plan was to park hop from Disney’s Animal Kingdom to Disney’s Hollywood Studios and end the day in Magic Kingdom with VIP viewing of “Enchantment,” the fireworks at Magic Kingdom. VIP viewing of the fireworks is not guaranteed, so be sure to let your tour guide know that you would like to view the fireworks as soon as possible.

In each of the parks, we focused on the attractions that are the hardest to get on, as our Tour Guide, Pete, was able to bring us through the Lightning Lane even though we had not purchased Lightning Lane or Genie+ for the day (just one perk of booking a Disney VIP Tour). At Animal Kingdom, we walked onto Flight of Passage (usual wait can easily be over 100+ minutes) and then did Na’vi River Journey. We didn’t do Expedition Everest, since it was closed during our visit, but would definitely recommend adding that to your list if you’re visiting Animal Kingdom during your tour.

After Na’vi River Journey, our Tour Guide brought us backstage to hop in a private van to be driven to Disney’s Hollywood Studios. This is another incredible perk of a VIP Tour – you get to see backstage a Disney (ok that’s cool for us Disney nerds!) and you don’t have to take public transportation to get to your next park.

We parked behind the Hollywood Tower of Terror and made our way directly to Star Wars: Galaxy’s Edge. Our first stop was Rise of the Resistance, which we were brought through the Lightning Lane, so we had no wait. When we got off of Rise of the Resistance, our Tour Guide was waiting for us with water bottles and led us to our next stop, Smuggler’s Run. We told Pete that we wanted to try to do “Chewie Mode,” which is when you click certain buttons to have Chewie be your guide rather than Hando Ohnaka. We were able to get some help from the cast members in the attraction and activated “Chewie!”

While we were in Galaxy’s Edge, Pete also pointed out a miniature Millennium Falcon that is on the life-size Millennium Falcon. As a big Star Wars fan, I thought this was awesome! (If you’re looking for it, as you walk into Smuggler’s Run, look at the fuel jet and find the gray slates that run down the side. At the bottom of the slates, you can see a mini-Millennium Falcon.)

Our next stop was Slinky Dog Dash in Toy Story Land. Once again we walked right on and then made our way to Toy Story Mania. After Toy Story Mania, we walked onto Mickey and Minnie’s Runaway Railway. Before we got on the ride, Pete told us some places to look for Hidden Mickey’s throughout!

After we got off of Mickey and Minnie’s Runaway Railway, Pete greeted us with Mickey Pretzels and Churros! It was a much needed sugar boost at that point in the day. We made our way to Tower of Terror, but unfortunately it broke down right before we got on.

We finished up all the attractions we wanted to do in Disney’s Hollywood Studios and headed over to Magic Kingdom in the private van. Once again, we were brought in through the backstage, so we didn’t have to worry about waiting in line for security or to scan in. Our first ride was Space Mountain and then The Seven Dwarfs Mine Train. We stopped to ride Peter Pan’s Flight before heading to Haunted Mansion where we got to go through a side hallway to be back-doored into the stretching room.

After Haunted Mansion, we went on Big Thunder Mountain, Pirates of the Caribbean and finally Jungle Cruise.

We ended the night in a private VIP viewing area to watch “Enchantment,” the Magic Kingdom fireworks while eating some food from Casey’s Corner.

Is a Disney VIP Tour Worth It?

I can say without a doubt, a private Disney VIP Tour is definitely worth the cost. You will get more done in one day with a VIP Tour Guide than many families will during a 3-day vacation due to the Guide’s expert knowledge in traversing the park. In addition, you will learn things about Walt Disney World that you never would!

Tours range in price from $425 to $850 per hour, with a 7 hour minimum, depending on the date. In order to book the tour, a credit card will be required.

As a Travel Agent who specializes in Disney, I can assist you in booking your Disney VIP Tour at no additional cost. Visit my Travel Planning website to provide the information I will need to help you out!

You can also call Disney directly to make a reservation on your own.