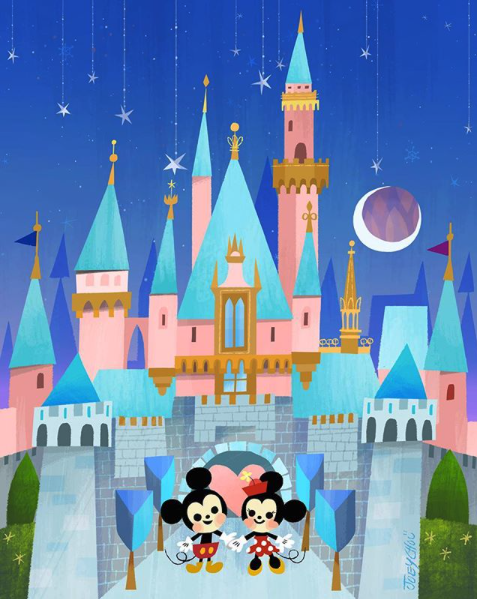 At the heart of the Walt Disney Company is art. Walt was first and foremost an artist, creator, and communicator. Today, art continues to be the fire that fuels the success of Disney, with animated films being the hub of all of the spokes of the Disney wheel.

Let’s face it, without Mickey Mouse, Snow White, and other beloved characters, the company that we love so much would be nothing. Behind those enchanting characters are artists. Animators like Ollie Johnston, Frank Thomas, and Retta Scott were integral in the creation of many of the most famous characters and continue to be role models for today’s animators.

Today, animators utilize technologies that could not even be imagined in the early days of the Walt Disney Studios. However, the essence and magnitude of their work has stayed the same – they are where the magic truly begins.

I don’t think I am alone when I say that for me, Disney is one of my main sources of inspiration as an artist. From the characters, to the music, to the feeling I get when I walk down Main Street U.S.A. in Magic Kingdom, I am continually fueled by the magic of Disney.

With the onset of social media over the last decade or so, it has been easier to find others like myself who are diehard Disney fans and artists. I have put together a list of my favorites (of those I have stumbled across)

I first found Ashley Taylor’s work on Etsy, when I was looking for art for my first apartment. Ashley had a series of teacup prints that included some famous leading ladies, including my favorite, Audrey Hepburn. I quickly followed Ashley on Instagram after realizing that she was a freelance artist for Disney and Her Universe. You may recognize Ashley’s work from the Disney Parks Blog and WonderGround Gallery.

Caley Hicks is a recent find, but gosh am I glad I found her Instagram page! Caley’s style is whimsical and original, with exquisite pattern work. She also includes some non-Disney pieces that celebrate the best animal in the world, cats!

Jay Ratner is a master at using every space of the canvas to share his love of Disney. He embraces bold colors and lines and and reimagines some of our favorite characters in different settings. Jay is also a contributor to the Disney Parks Blog and a featured artist at WonderGround Gallery.

Joey Chou has a rich background in visual development art and illustration. It is easy to see that he draws inspiration from the art of the 1960’s and Mary Blair. Joey’s art can be found in a number of children’s books and at WonderGround Gallery.

David Pavon is illustrator, animator, and visual development artist from Spain. David’s work is varied, showing his talent as an artist. He has an active Facebook where he highlights his newest projects and interacts with fans.

Are you inspired by Disney when creating your art? Let me know below!