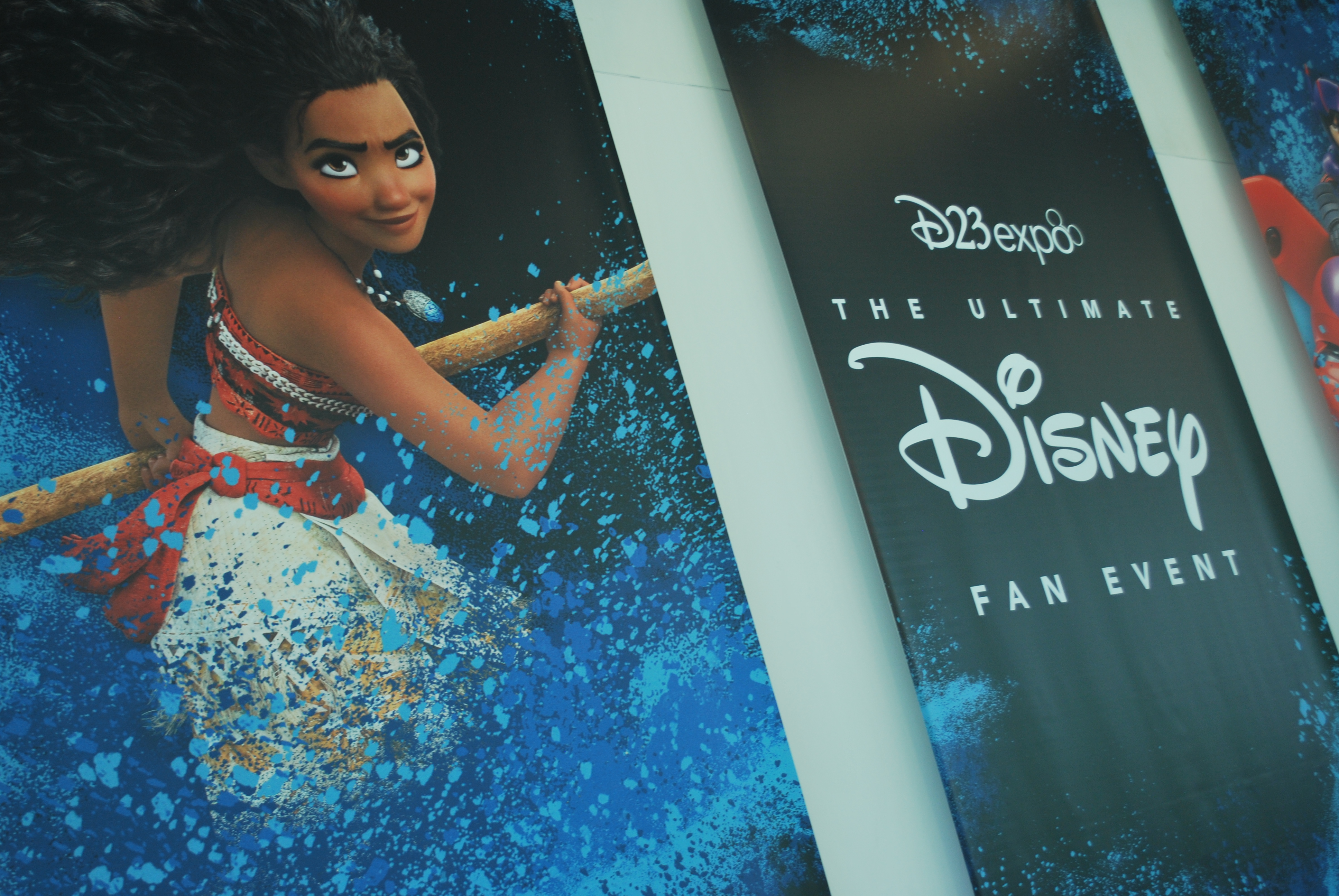 I hope that my last post held you over for a few days while I prepared this epic retelling of my D23 Expo experience! Ok, epic may be exaggerating a bit, but it truly was an incredible couple days and if you’re a Disney fan, you need to put the D23 Expo on your Bucket List! There is so much to share, so I will try to break it down in case you’d like to skip to a particular topic.

Let’s start at the beginning – the D23 Expo is a bi-annual fan convention that brings together thousands of Disney fans to celebrate the past, present, and future of The Walt Disney Company. All areas of the company are showcased over three jam-packed days, including the parks and resorts, studios, television, music, theatrical, and merchandise. Throughout the three day event, attendees can sit in on panels and presentations, meet celebrities, get access to Expo-only merchandise, and hang out with other Disney fans. On top of all of that, many of the biggest Disney news stories break while at the D23 Expo.

My boyfriend, Pat, and I bought our tickets about two months before the Expo and purchased Friday and Sunday tickets, as the 3-Day Passes and individual Saturday badges were sold out. Using my D23 Gold Member login, I was able to get my tickets for $10 less than the general public. (TIP: If you are planning on going to the D23 Expo join as a D23 Gold Member. You get discounts on your badges, discounts at certain booths at the Expo, have access to a Gold Member Lounge, get a special gift, and can take advantage of Gold Member queues for certain panels and presentations. I would highly recommend it.)

We booked four nights at the Red Lion Anaheim Resort, which was about .4 miles from the Convention Center, where the D23 Expo is held, and .7 miles away from the entrance of Disneyland. Location wise, this hotel was incredible and I would definitely recommend if you’re looking for an affordable and close spot. However, the facility itself was nothing spectacular and probably will not be where we stay next time we go – I will say, we may be a bit spoiled since we mostly stay on property when visiting the parks!

I could do an entire post just on all the incredible news that came out of D23, but so many others have already shared, that I am sure you’ve heard it! Just in case, here’s a quick run down –

The D23 Expo hosts countless panels each day that discuss all aspects of the company. Panels are held in several different locations across three floors of the convention center and draw anywhere from 300 to 5,000+ people.

Going into the Expo I expected to stand on line after line for any of the panels. However, I didn’t stand on one line for a panel. My trick? Don’t go to the “E-ticket” panels, i.e. the Disney Legends Ceremony, Walt Disney Studios Animation and Live Action Presentation, and Disney Parks, Experiences, and Products Presentation.

I know what you’re thinking – “but that’s why I came to the Expo! To hear all the news!” And if that is the case, than stand in the lines (PS – people were lining up each night once the convention center closed at 7 PM for the next day’s panel)! For me, I knew that the information that would be discussed in those panels would be shared across every social media platform. What would not be shared is the stories Imagineers who worked with Walt were telling in other panels. One of my favorite moments of the Expo was listening to animator, Floyd Norman talk about Walt’s process of constructing a story from start to finish. Even my boyfriend, who has become a Disney fan because of me, said his favorite part of the Expo was the stories that you heard that made you feel like you had just found out a secret about Walt’s life.

As a note, advanced Reservations are available for panels, talent signings, and shopping. The reservation system opened the week before the Expo and I was lucky enough to snag a few panels and talent signings. Unfortunately, I did not get any “shop passes” to visit the merchandise locations or “stage passes” for the “E-ticket” panels.

You could easily spend three full days at the Expo and never step foot in a panel or store because there is so much to explore on the Expo floor! When we entered the Expo floor on the first day I instantly became overwhelmed. I wanted to see every single booth and take in as much as I could. We started on the right end of the hall in D23 Emporium. The Emporium is home to companies and individuals who purchase booths to promote/sell their products. If you are a Disney history fan this area is a must do, as many fan sites and auction houses are in attendance with priceless Disney artifacts.

Right behind the Emporium is Talent Central. At Talent Central, and a number of other booths throughout the floor, celebrities will take pictures and greet fans. We had the chance to meet seven Disney Broadway performers while there and each graciously signed a small card and took a picture with us. Other talent that was in attendance included Keegan-Michael Key, Ashley Eckstein of HerUniverse, and several Disney Artists.

To the left of the Emporium and Talent Central is a myriad of booths and pavilions (what I referred to large booths as, because “booth” just doesn’t do it justice!). Areas of The Disney Company, including Walt Disney Television, Disney Music, Disney on Broadway, Marvel Studios, Lucasfilm Ltd., Disney Parks (Imagineering), Walt Disney Animation Studios, Pixar, Disney Vacation Club, Disney Social Responsibility, and Disney+ were all represented with their own booths/pavilions. Disney partners, such as Brother, Taschen, OtterBox, Walt Disney Family Museum, Walt Disney Hometown Museum, BoxLunch, and Steiff additionally had booths were products and information was available.

The stand out booths/pavilions for me were Disney+, Disney Parks (Imagineering), and The Hometown Museum. Disney+ offered attendees the opportunity to sign up for the streaming service at a discounted rate and join the “Founders Circle” (of course I did it… you got a pin! Duh!). Disney Parks included a walk through that highlighted some of whats to come, including additions and changes to Epcot and the brand-new Avengers Campus coming to Disney’s California Adventure and Disneyland Paris. Finally, the Walt Disney Hometown Museum was simple in its layout, but told the story of Walt’s life in Missouri effortlessly. I think most of us left there wondering when we can make the pilgrimage to Missouri!

There are countless opportunities for you to build your Disney collection no matter what you collect while at the D23 Expo. Apart from the Disney Emporium mentioned above as well as the Disney partner vendors throughout the Expo Floor, Disney has several merchandise locations.

If you are hoping to snag some of the limited edition items you will definitely want to get to the Expo early and prepare to camp out in line for a bit.

I was very concerned about the food situation because I have an allergy to gluten and have a difficult time eating out in general. I couldn’t imagine what I was going to be able to eat at a convention! I read that outside food would not be permitted into the Expo hall unless you had dietary restrictions. I stocked up on gluten-free bagels, little packs of Nutella, gluten-free pretzels, and KIND bars and hoped that security wouldn’t stop me (if you’ve ever told someone you are gluten free you know the face you often get, as people think it is a fad diet and not a necessity for your health…). Thankfully, the security was great – honestly, overall I have to say kudos to the team they had working, as they were welcoming, polite, helpful, and understanding – and let me bring in all my goodies without question!

It seemed that most people were getting through security with food, so consider bringing your own lunch or at least snacks to save a couple of dollars. However, I did hear one family complain about their food being confiscated, as they saw me grab my gluten-free bagel out of my bag (whoops!), so it’s hit or miss!

There are a number of food options throughout the Expo as well as food trucks that park right outside of the convention center.

The best part of the D23 Expo hands down was the people. Everyone, from the fans in attendance, to the Disney-lovers manning their booths in the Emporium, to the talent that you ran into both at the Expo and on property, were welcoming and just so excited to have a bunch of people to geek out over Disney with. I witnessed so many moments that truly touched my heart, as I saw the power of this company to make people feel accepted and loved. I myself felt like I was truly in my element. I didn’t have to downplay my knowledge of Disney or feel like I had to stop talking about Disney after a few moments so not to bore the people around me – it was incredible and something I can hardly put into words.

One of the most surreal moments of the weekend was meeting Imagineer, Joe Rhode at Disney’s Grand Californian. Mr. Rhode was so gracious when I asked for a photo and took time to visit with every Disney fan that ran over to him bursting with excitement.

If you are a Disney fan, which I would assume you are if you’re reading my blog, I highly recommend saving up for the next Expo in 2021. I read every blog and watched every video I could find about the D23 Expo to prepare myself, but nothing I read or watched truly was able to embody the feeling I had being surrounded by my people for a whole weekend. Trust me, you will love it.