Disney Around the World, Disney News, Disney Trips
by karma&kismet 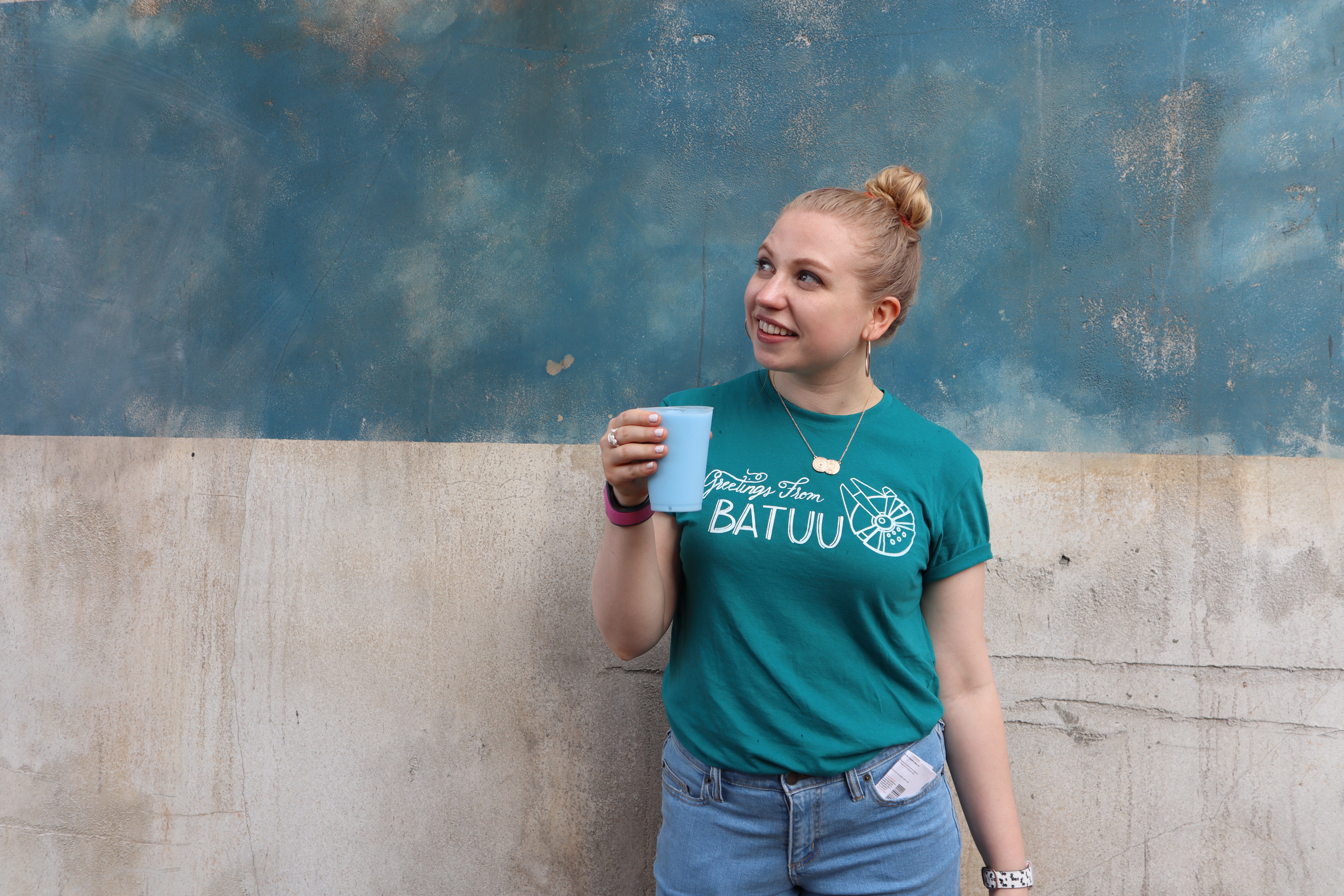 On August 29th, Galaxy’s Edge will open at Disney’s Hollywood Studios at Walt Disney World in Orlando, Florida. I was lucky enough to get the chance to check it out beforehand through a special preview and have all the information you’ll need to be ready for your trip to Batuu (the name of the planet in the Star Wars universe you’ll head to). Of course I had to wear my Galaxy’s edge shirt!

A bit of background – I was beyond excited for Disney to create a Star Wars world that I could explore in person, as a Star Wars fan since my Dad popped in the VHS tape of “Episode IV: A New Hope” back in the day. My expectations were probably a little too high, but let’s face it, I had been waiting since around 1996 to fight alongside Luke, Leia, and Han, so how could they not have been? I will share my thoughts on Galaxy’s Edge at the end of the post, but here’s the low down –

The entrance to Galaxy’s Edge is located past Sci-Fi Dine-In Theater Restaurant and the Baseline Tap House in Disney’s Hollywood Studios. The gray archway you enter through by no means screams “Star Wars,” but that’s the point – it doesn’t take away from the theming of the existing area. Walking through the archway, you enter what reminded me of a tunnel that you might drive through on a highway, but then you are hit with the world of Star Wars as you exit.

Galaxy’s Edge is a total of 14 acres and includes:

Millenium Falcon: Smugglers Run is the first attraction to open at Galaxy’s Edge and invites guests to “Fly the fastest shop in the galaxy while hurtling through hyperspace.” The queue takes you through a spaceport where the Millenium Falcon is parked (do you park a ship in space or is there a different term?). After weaving through a few different rooms and levels, you enter the pre-show, where you are addressed by Hondo Ohnaka, the leader of the space pirates gang know as the Ohnaka Gang. Ohnaka is joined by Chewbacca and you learn that you will be asked to assist in a smuggling mission. No worries though, because you’ll be flying on the Millenium Falcon, which can make the Kessel Run in less than twelve parsecs, if you didn’t know. You will be led through a few more rooms as you board the Millenium Falcon and get a chance to do a little exploring before you head to the cockpit.

Along with 5 other crew members, you will be assigned a position – pilot, gunner, or engineer. There are two of each that sit parallel to each other once in the cockpit. As you enter the cockpit, you will notice lots of buttons, flashing lights, and a screen in front of you. The ride itself is a simulator and is similar to Star Tours and Mission: Space. The only difference is pushing the buttons actually matters in this ride.

If you get motion sickness, this is an attraction to definitely avoid. You spend a lot of time moving your head from side to front if you are not a pilot, as you are pushing the buttons that are on the walls next you.

Rise of the Resistance will be opening on December 5, 2019.

If you are a diehard Star Wars fan, bring lots of money. There is a good mix of merchandise that ranges from pins, to apparel, to plush. In addition, guests have the opportunity to build their own lightsaber or droid.

Savi’s Workshop, which is a discreet scrap shop, offers visitors of Batuu the chance to build their own lightsaber for $199.99. While it was a little too pricey for me, and I didn’t know how I would get it home on the plane, videos that have been post of the experience look incredible and a must-do for the biggest Star Wars fans. Be aware that reservations may be required for this experience.

Another experience available is at the Droid Depot. Visitors of Batuu can build their own droid for $99.99 that will interact in the land and with other droids. You can create a BB unit or a R unit depending on who your favorite droid is. In addition, you can add a personality chip that will change the way your droid reacts in certain areas of the land. Be aware that reservations may be required for this experience.

There are a number of different options available through Galaxy’s Edge that are open for breakfast, lunch, and dinner. While I was visiting Batuu I stopped by the Milk Stand for a cold glass of Blue Milk ($7) and was pleasantly surprised by how good it was. Green Milk is also available at the stand and both consist of rice and coconut milk (gluten free, yeah!). Alcoholic versions are available for $14, as well as a souvenirs cup ($24.99). My next stop was Oga’s Cantina. The bar serves alcoholic and non-alcohic drinks and limits guests to 2 drinks per person. While I was there, you were required to leave after 45 minutes to give other visitors the chance to experience the cantina. The atmosphere was great, but I missed the jazzy music that is played “A New Hope.” The music instead had a dance/club vibe that I just wasn’t about.

Other food and beverage options include Kat Saka’s Kettle, where local flavors of popcorn are available, as well as a souvenir popcorn bucket, Ronto Roasters, where grilled sausage and pork wraps are served, and Dockig Bay 7 Food and Cargo, which has a variety of dishes from across the galaxy.

As a whole, Galaxy’s Edge met my expectations, but did not exceed them. The detail is phenomenal. From the signage, to the food and beverage offerings, to even the bathrooms, Disney brought Star Wars to life in a way that I don’t think any of us could have imagined. Hands down, the best part of the experience was the Cast Members. Each have their own backstory explaining why they are on the planet of Batuu and help to make guests feel like they truly have been transported to a galaxy far far away. The food and beverage offerings were well themed and brought to life many fan-favorites, like Blue Milk. I was impressed with The Market area, which includes four of the merchandise locations and truly looks like you are walking through a market on a distant planet.

Where I think Disney fell short was the attraction, Millenium Falcon: Smugglers Run. The story was difficult to follow and the queue, up until the pre-show, didn’t really give me many hints as to what was to come. The ride itself didn’t blow me away, as it was like Star Tours and Mission: Space rolled into one. However, I have a feeling that Rise of the Resistance will be the real draw in terms of attractions at Galaxy’s Edge. Stay tuned for December 5, 2019!

Have you visited Galaxy’s Edge at either Disneyland or Walt Disney World? What did you think? Let me know below!