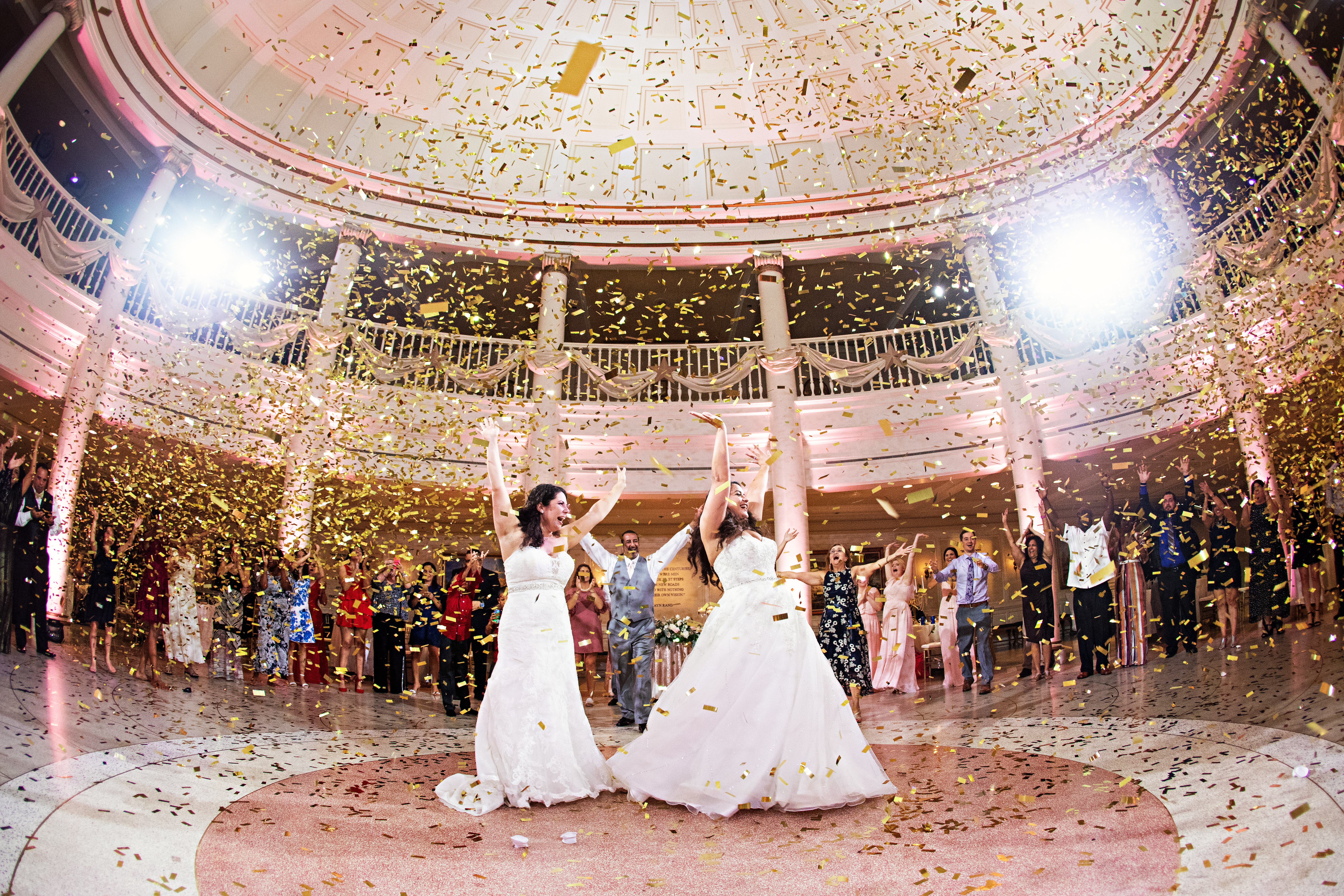 Each year, more that 1,500 couples say their vows on Disney property. From Walt Disney World, to Disney Cruise Line, to Aulani, Disney Parks and Resorts (and ships!) have become a go-to destination for more than 30,000 brides and grooms since Disney Fairytale Weddings was created in 1991.

When you hear “Disney Fairytale Weddings” a few thoughts, other than how incredible it would be, might pop into your head – “that must be so expensive,” “I don’t want to have the same wedding as 30,000 other couples,” “I love Disney, but I don’t want Mickey and Minnie to outshine me on my big day!” Valid thoughts and with all of the stress of planning a wedding, who wants to add even more worries to your plate? However, if over 1,500 couples get married on Disney properties each year, there has to be a reason.

I did a little digging and spoke with four Disney couples who set the record straight. Three of the four couples exchanged vows at the Disney Wedding Pavilion located at Disney’s Grand Floridian Resort and Spa, but had completely different receptions and after parties, spanning from the Rotunda in The American Adventure, to a Dessert Party and Illuminations Fireworks viewing in Epcot’s Italy Pavilion, to a dance party with Mickey and Minnie at the Grand Floridian. The fourth couple exchanged vows at Castaway Cay’s Wedding Pointe and held their reception aboard the Disney Wonder in the Azure Lounge. Each couple created a day that was uniquely theirs!

Lisa and Nicholas reside in New York City and have family scattered all across the world. When they began planning their wedding, they knew that their families would have to travel no matter where they got married and quickly realized how expensive a wedding in NYC can be (helpful hint: check out the Disney Fairytale Wedding’s website to get a general idea of what your dream wedding would cost and compare it against a local wedding – many couples determine that a Disney Wedding is comparable, if not less expensive when you add everything up!).

They decided to get married in Walt Disney World at the Wedding Pavilion on Thanksgiving week in 2017. Lisa and Nicholas selected the Wishes collection, one of three tiers that Disney Fairytale Weddings offers that differs based on locations, guest count, and price, and were lucky enough to secure their desired date at the Wedding Pavilion and hold their reception at the Grand Floridian Ballroom.

While the wedding was about their love for each other, Lisa and Nicholas’ favorite part was seeing their guests have so much fun at a place that is special to them. The couple even got Mickey and Minnie to join in the festivities!

Advice from the Bride and Groom: Trust your Wedding Event Services Manager! Let them be your guide and navigate the crazy wedding planning!

Alexis and Miranda were married at Walt Disney World in November 2018. Disney has been a prominent part of their relationship and they had always dreamed of a Disney wedding. Being local to the area, they compared the cost of a Disney wedding to other venues and realized it was actually comparable and did not have to compromise their dream wedding. They selected the Wishes package and held their ceremony at Disney’s Wedding Pavilion and reception in the American Adventure Rotunda in Epcot.

With the help of their Wedding Event Services Manager, Alexis and Miranda made the wedding of the dreams a reality. Their special day included a ride in Cinderella’s Coach, going backstage at Epcot to attend their reception, watching Illuminations from the bridge in Italy, and sharing their last dance to the Happily Ever After Soundtrack with a confetti cannon exit! Their favorite part though was having Minnie and Mickey dance with their guests and the incredible Bridal portraits they were able to take in Magic Kingdom and Epcot.

Advice from the Brides: Enjoy your wedding day and don’t stress about the small stuff. We stressed about the timeline of our day, but ultimately the guests have no idea what is supposed to be happening or if something ends up differently than planned. Everything will work out and you will have an amazing and magical wedding!

Casey and Mikayla decided to take their wedding to the high seas and exchanged vows at Castaway Cay’s Wedding Pointe. Their reception was held aboard Disney Cruise Line’s Wonder in the Azure Lounge. The couple selected an upgraded Cruise package, as they wanted to bring together all the different people in their lives to share an experience they would never forget. Working with their Wedding Event Services Manager, they were able to do just that and it was “SUPER EASY” to plan!

One of their favorite parts of the experience was the delicious cake, that they continued to enjoy in their stateroom in the days following their wedding (pro tip from the couple: you can eat cake for breakfast on your honeymoon!)

Advice from the Bride and Groom: Plan your honeymoon for immediately after and take a cruise! You’re going to want to have time and space for the both of you after all the hard work and preparation. A cruise is such a fun way to do it because it is relaxing and Disney takes care of all the planning. You just show up and have fun!

Brian and Vanessa’s love of Disney goes back years. Their first trip together was to Walt Disney World, they were engaged in Disney, and Vanessa even told her father when she was younger that one day she was going to ride in Cinderella’s Coach and get married in Disney.

Vanessa’s dream came true in May 2019, when she married Brian at Disney’s Wedding Pavilion. The couple selected the Wishes package and held their cocktail hour at the Whitehall Patio at the Grand Floridian (located under the monorail), their reception at the American Adventure Rotunda in Epcot, and a Dessert Party at the Italy Isola in Epcot.

Being New York residents, the majority of communications with their Wedding Event Services Manager were through email. Brian and Vanessa would share photos of inspiration with their Event Manager and had to place a lot of trust in Disney to create their vision. The couple was pleasantly surprised by the outcome and were blown away by Disney’s ability to make their dream a reality!

One of their favorite parts of the day was walking through Epcot in their wedding attire along with their closest family and friends. Guest yelled congratulations, clapped, and made the day even more magical.

Advice from the Bride and Groom: Make sure you know what you want and use as much detail as possible with speaking with your Wedding Event Services Manager. It was the little details (Cinderella Coach, hidden Mickeys, Mickey ice cream bars, personalized photo sign in, etc.) that made our wedding so special! Also, don’t waste too much money on floral. Any Disney backdrop is impressive, you can easily dress it up with candles, which are much less than floral!

Disney Fairytale Wedding’s hosts weddings of all religious denominations and will work with each couple to create a day that is special to them. Events are held in Walt Disney World, Disneyland Resort, Aulani Resort, and on Disney Cruise Line. Additionally, Disney’s Vero Beach Resort also is available as a wedding location. The best place to begin learning about Disney Weddings is the Disney Fairytale Wedding’s website. Other resources that brides and grooms have found helpful include the Disboard Wedding Forum, the Official DisBrides Group, and the Disney Weddings Podcast. Another incredible resource are past Disney Brides and Grooms – be sure to check out each of the couples who shared their experiences above on Instagram!

This post only skims the surface of Disney Fairytale Weddings and I look forward to diving deeper into the topic, including ways to save money on your Disney wedding, other locations in the Orlando area to host a Disney wedding, and ways to bring a little Disney magic into your wedding no matter where it is! Let me know what you are most interested in learning about below!