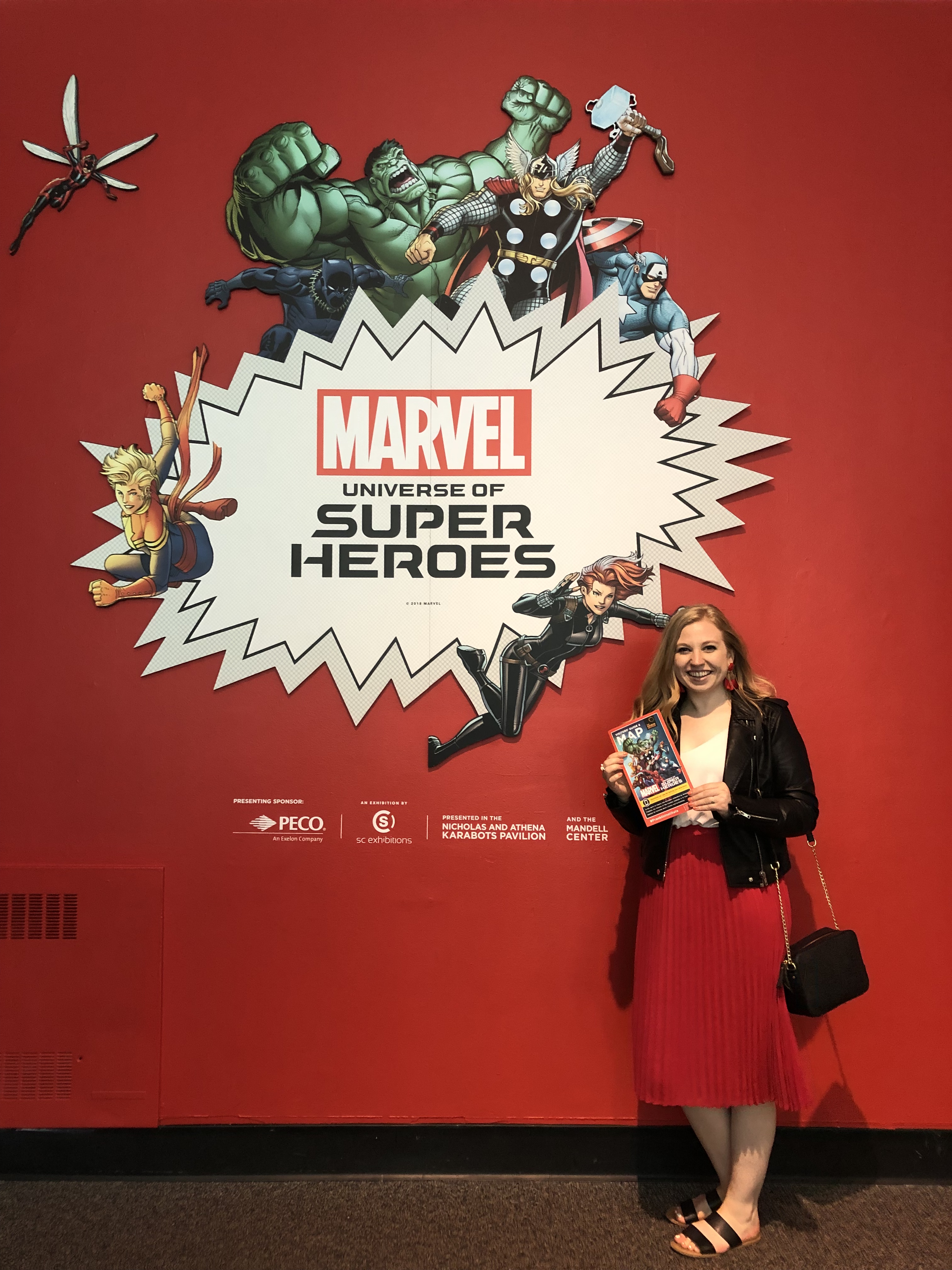 The Franklin Institute in Philadelphia, Pennsylvania is one of the oldest centers of science education in the United States, having been founded in 1824. It is a popular destination for visitors to the area, with ever changing exhibits that intrigue just about anyone.

This weekend, I had the opportunity to explore the Institute’s newest exhibit, MARVEL: Universe of Super Heroes. The exhibit, making its East Coast premiere during Marvel’s 80th anniversary year, is 15,000 square-feet of pure Marvel magic. It includes over 300 artifacts from the Marvel Universe that range from costumes and props, to original art by such iconic artists are Jack Kirby, Steve Ditko, and Marie Severin. Die hard to brand new Marvel fans will be able to spend hours in the space exploring the several rooms.

Of course, I had to dress for the occasion! I grabbed this pleather jacket from Target for $10 and painted Captain America’s shield on the back. I paired my DIY jacket with a midi-red skirt, white tank, and red dangle earrings!

I visited along with my boyfriend and best friend and we purchased the exhibit only tickets for $20. These tickets are available for evening hours only, Thursday through Saturday (5 PM to 8 PM). General admission daytime tickets are a bit more, at $35, but grant you access to the entire museum. Having been to The Franklin Institute several times before, we did not feel the need to purchase the General admission tickets, but I would highly suggest that option if this is your first time visiting.

Your ticket will provide you a time of entry, which ensures you can enjoy the exhibit without fighting through a huge crowd. As you enter the exhibit, you are met with a newstand that includes some of the most well known Marvel titles, before heading in to a small theater to watch an introduction video. After the 5 minute video, you will journey through Marvel history beginning with the original copy of the first comic (biggest geek out moment of the exhibit!) and ending with the most recent iterations of Stan Lee’s characters.

The exhibit has a great mix of original artwork, props from the movies, interactive media, little-known facts, and photo opportunities. One of our favorite parts was a wall dedicated to Stan Lee’s cameos in the Marvel films!

We spent a little over an hour exploring the exhibit, but could have spent longer if we had stopped to read every placard. If you are planning to do so, I would suggest hanging back at the beginning, as to avoid the crowd that exits the short introduction film at the beginning. Doing so will also cut down on your wait if you take advantage of the photo opportunities that are in each room. I had so much fun posing with some of my favorite Marvel characters!

Marvel: Universe of Super Heroes will run through September 2nd and is a must-do if you are in the Philadelphia area!

Have you visited Marvel: Universe of Super Heroes yet? Tell me what you thought in the comments!

Previous Cruising with Disney Cruise Line at Any Age Next Disney Fairytale Weddings - Making your Dream Wedding a Reality!